After nearly 20 years of rapid growth, Widmer Roel’s old office was bursting at the seams. Their new location, filled with natural light and modern finishes, will allow the firm the space and flexibility they need to continue to grow in the next 20 years.

Widmer Roel, a certified public accounting firm in Fargo, North Dakota, has undergone several moves since their inception in 1973. Harris Widmer and Bob Roel started the business out of an office building in downtown Fargo, and as they added employees, the firm moved into a repurposed home on South University Drive in 1977. When they moved into their most recent location at 18th Avenue South in 2003, they were confident that it would accommodate their team.

And it did—for a while.

“When I started, we had 13 people total and that included our seasonal staff,” said Tracee Buethner, an audit partner with Widmer Roel since 2001. “Less than two years after we moved in, we ended up having a merger and outgrowing the space. If we’d known how much we were going to grow, and how quickly, we would have designed that space totally differently.”

“We filled any nook and corner we could for the longest time, but they still didn’t have enough break room or meeting space,” said Melissa LaBay. “They just didn’t have enough space for all of their people. So that’s when we helped them build a bigger space.”

Widmer Roel moved into their brand-new South Fargo building in May 2021. The project was spearheaded by Buethner and Bob Dale, Managing Partner at Widmer Roel since 1995.

“Every inch of our old building was being used. People were working in the hallways,” Dale said. “So in the new build, we have expanded to 15,300 feet. We’ve created a design that will use all of the space and have plenty of storage, yet have a really open feel.”

In addition to the lack of space, Widmer Roel’s old office was simply outdated. Dark cherry cabinets and rich red and orange furniture seemed to absorb what little natural light the crowded space allowed, adding to the claustrophobic atmosphere. One of their priorities with the new build was curating a space that would withstand the test of time.

“Our culture is so important to us. In order to continue to build a great company, we need to create a great environment for our staff,” Buethner said. “We wanted to create a more modern look, something that would last us for the next 15, 20 years.”

While LaBay was tasked with furnishing the open office areas and private offices, her co-worker, Sheila Hanson, coordinated and specified the interior finishes for the new building.

“We had a very clear idea of what we wanted the office to look like, but it can be difficult to actually visualize what it will look like in your space,” Dale said. “Melissa was able to take the colors and finishes we wanted, add them to their drawings, and give us a 3D visual of what it would look like. She made sure all of the pieces worked together. We wouldn’t be here without her.” 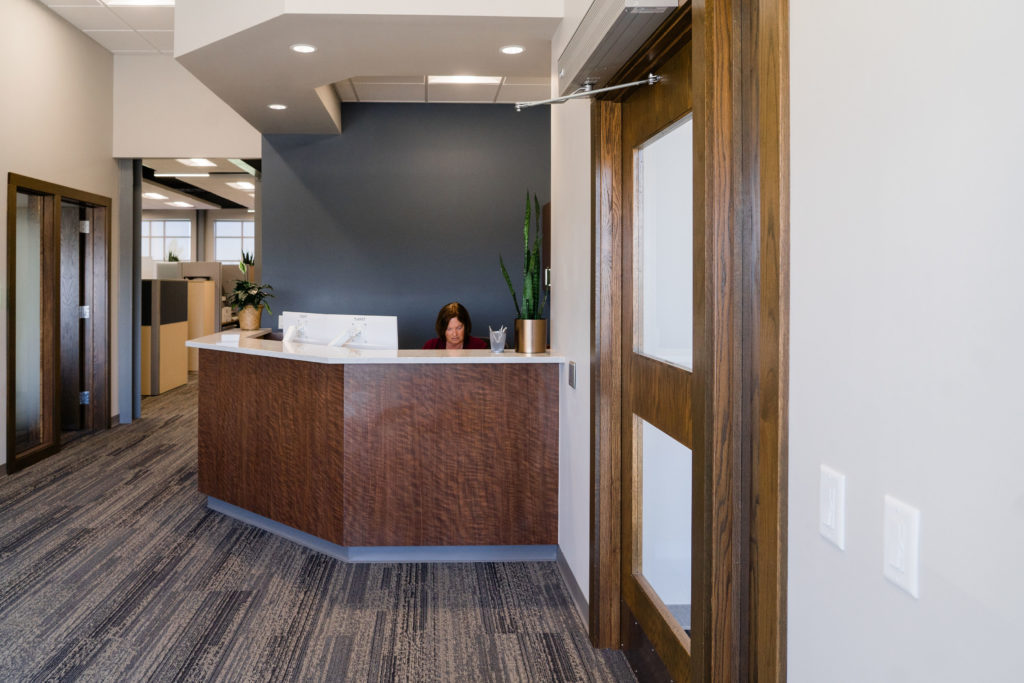 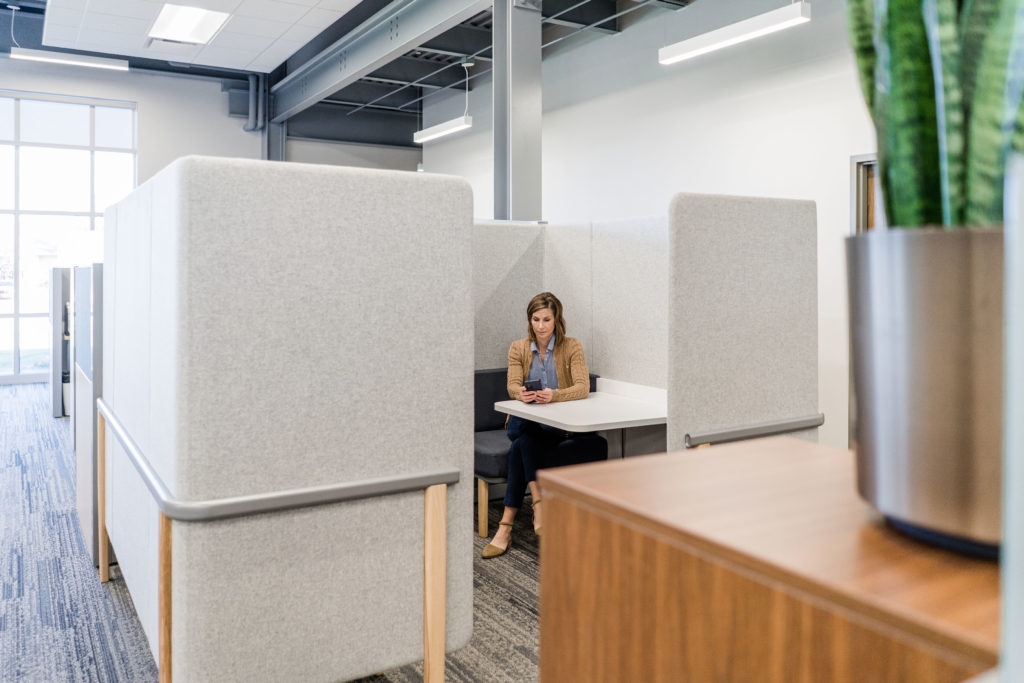 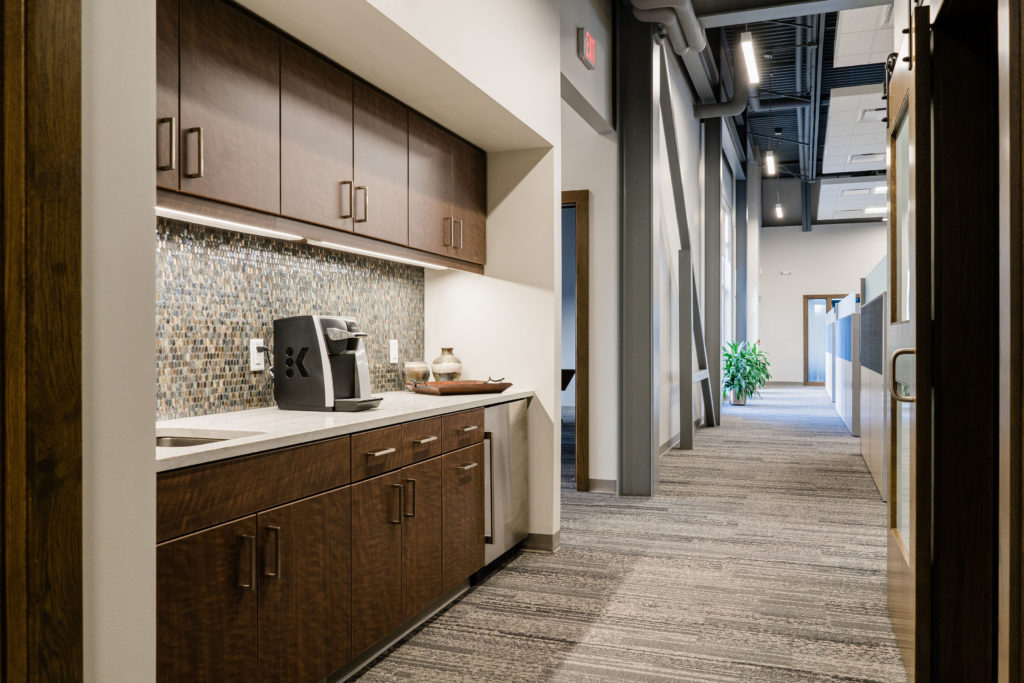 The new building already had more natural lighting than Widmer Roel’s previous office. To bring even more brightness to the space, LaBay and Hanson chose light, neutral paint colors with blue-grey undertones that complemented the blue in Widmer Roel’s logo. LaBay and Hanson also incorporated a few warm accents, like caramel tile surrounding the fireplace, to create a space that feels fresh and timeless, while still being welcoming and comfortable.

The break room was another priority for Widmer Roel. They wanted to provide a space where people wanted to be, where employees and customers alike could gather over a cup of coffee, a freshly baked cookie, or a potluck-style lunch. InterOffice designed the cabinetry for the space, as well as storage solutions to keep food and other supplies out of sight.

“This is actually the first break room where we’ve done white cabinetry,” Hanson said. “They wanted this space to feel very light and airy. Bob specifically requested more of a residential style kitchen where people naturally gather, as opposed to a commercial break room kitchen.”

For the fifty new workstations and eighteen private offices, InterOffice provided Herman Miller Canvas products. The workstations consist of three different sizes and configurations for multiple levels of staff, are easily navigable, and can be adjusted to accommodate Widmer Roel’s changing needs. Electric height-adjustable desks and Herman Miller Aeron chairs were also incorporated into every workstation and private office to give each employee customizable ergonomic comfort.

“Melissa was able to provide the direction of where we needed to go. She understood our vision and wanted to make sure that we got what we wanted and pulled it all together,” Buethner said. “This building just puts us right where we need to be for the next 20 years, and beyond.” 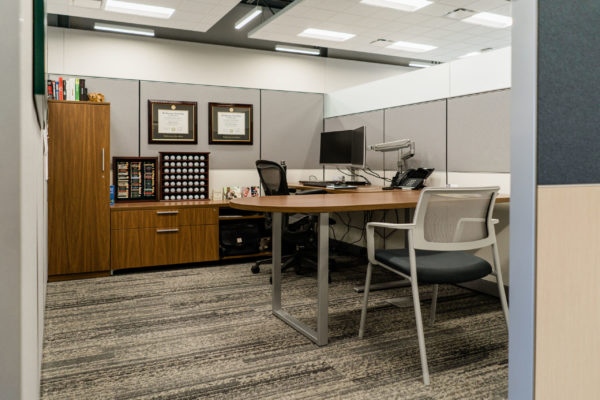 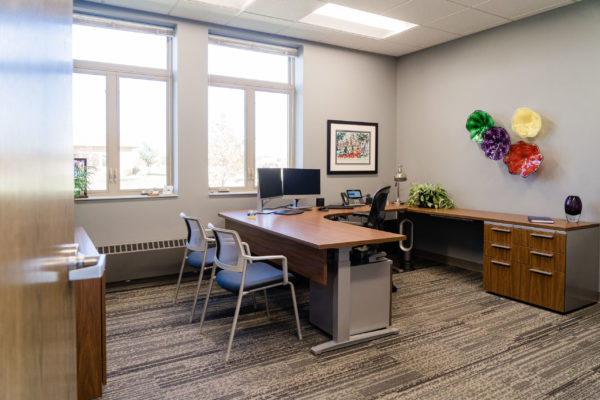 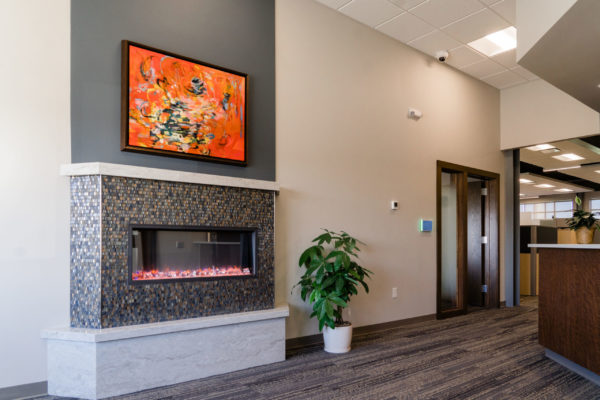